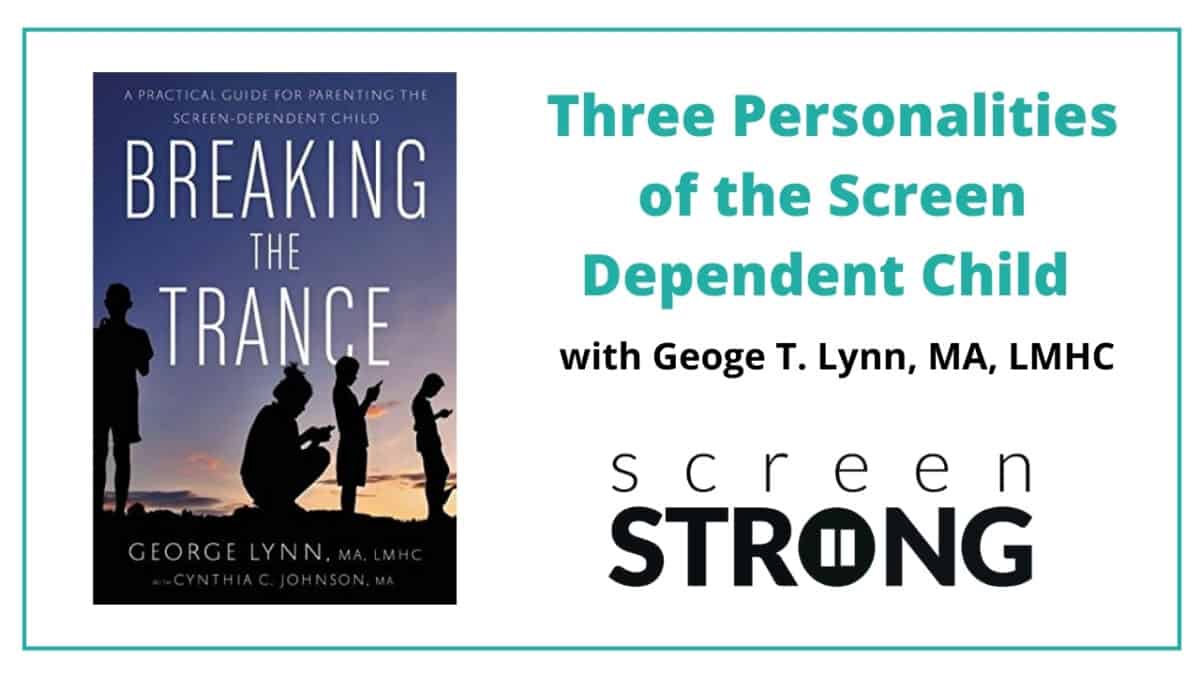 In this post, we continue our Book of the Month series with an interview between Melanie Hempe and Breaking the Trance co-author, George T. Lynn. We previously heard from Cynthia Johnson and her interview is available on our site.

Melanie Hempe (MH): How did you become passionate about this issue?

George T. Lynn (GL):  I’m, by way of introduction, a mental health counselor in the Seattle, Washington area.  I’ve been in this area 35 years or so.  Back about 10 years ago I started noticing a trend in my practice where parents were beginning to talk more about their kids’ involvement with screen media.  I noticed the screen media use was becoming a significant issue with the kids I worked with.

As the years rolled by, it became difficult for me to use some of the strategies I had been using before the onset of screen media in kids’ lives.  So, my passion for writing the book was taking a look at what had been going on, trying to discern the difference between when a problem in a kids’ life, such as difficulty at school or mood issues at home, was related to a diagnosable syndrome or related to something else.  The screen media piece became immediately obvious to me.

MH:    You were in on that ground floor in the days when video game addiction was a foreign word.  So, I’m gathering you were on the other end, seeing it from a professional angle, looking at kids that were having all these strange problems.

GL:  Right.  And also seeing parents feeling helpless with it, thinking what do I do with this?  On the one hand, in the book, parents themselves where in a trance state around this.  Imagine we are all surrounded by an invisible bubble, when information comes at us, we filter our reality though this bubble of our own belief state.  The belief state a lot of parents were in, they were unused to this, they really didn’t know the impact of how video game or social media application could twist kids’ lives, but they would feel a lot of guilt, they wouldn’t know what they were doing wrong.  When I initially started talking about how much time kids were spending on video games, the parents would say “It’s harmless fun,” “I don’t see what the problem is,” “He doesn’t really have too many friends in his life anyway,” that kind of thing.  It’s a sneaky, quiet erosion that began happening in my practice.

MH:    In chapter two you talk about “over clocking the brain.” Can you explain what that means?

GL:      I’m not a doctor but I study doctors and have studied the research they presented on this. Basically, a lot of it comes down to the term “over clocking.”  Those of you who work a lot with computers know that you can over clock the processor on the computer, which means you can set the computer to run faster than it is designed to run.  You have to watch out when you do that because the machine can over-heat and the mother board burns out.

That’s somewhat similar to when kids spend a lot of time playing video games.  Playing video games results in a chronic firing of low-level stress.  What that means is anything that is exciting to us, either good or bad, causes us to experience stress.  So, what happens with kids when they get into hours of play is their brains release low levels of adrenaline.  These low levels of adrenaline cause a cascade of effects in the brain that result in the release of corticoid releasing factor and other neurochemicals that, overtime, erode the structures in the brain, specifically, the memory structure (the hippocampus) and cause other effects.

So, on the one hand, you have a kid playing a video game and he is feeling really good, his brain is awash in dopamine and, on the other hand, what he doesn’t know, the price his nervous system is paying for this is the buildup of these corrosive neurochemicals all around his brain.  That results in specific behavior effects, changes in mood and cognitive ability, and changes in the the ability to remember things.  If this becomes a chronic condition, these effects start changing the kid’s personality.

The other part of this that I noticed in my practice was that as the years went on, by the time I got to writing the book, I actually started to see fewer kids coming in with these serious mental health issues because the kids were basically dropping out of life.  What happens when a kid withdraws from school and becomes isolationist, a lot of these issues are sort of muted or hid.  That’s why, in my book, I spend quite a bit of time on how screen, video-game play specifically, can hide or make worse a variety a childhood disorders from ADHD to autism to bipolar disorder, you name it.

MH:    You talk about kindling.  Explain that kindling effect.

GL:     Kindling is the idea that what we do grows on us.  If our brains get accustom to this low-level depression and anxiety that is caused by video games, the kindling effect means that there is kind of a groove that develops in the brain between neurons.  Once the state is in place, unless it is dealt with and treated, the second time it comes around, it is going to get worse—the groove gets worse.

MH:  What is your recommendation for a parent who is listening and says “But my son is only 8-years-old.  I know I start to see some of this, but what am I supposed to do?  Am I supposed to take video games away from him?  This is what boys do, right?”

GL:  One of the signature things about the book that I wanted to write about was the importance of values – family values, specifically.  With regard to taking a kid who is now playing too much and the mom or dad is going “Oh what do we do with this?”  I just want to place that question in context that the best thing is not to have the process started at all, but that’s not the question, so the best thing is think about what looks like a good productive day for that kid and if those beliefs are instilled in that kid, they are going to have less problems with time-wasting.  The one thing a parent can do is just put a time limit on it.  But, in terms of the neurochemical effect, requiring the kid to take a break.  It’s a little thing, but it’s an important thing.  Like, every half an hour, you need to walk away from your device for 10 or 15 minutes, go out and bounce the basketball a little bit.  I think the AAP says definitely no more of an hour without a break.

MH: Let’s talk about the critical time between six years old and twelve years old.  What do humans need and what is not happening? Why are kids’ identities getting stunted?

GL:  I think it gets down to the fact that humans need other humans to develop normally.  A child’s identity is the answer to three questions:

That is an extremely important internal narrative to have.  If that narrative is confused and kids don’t have a sense of who they are.  If they don’t have the opportunity to go through the joys and sorrows of making friends, then their growth is stunted.

In that six-year-old to twelve-year-old age, that a major time when kids are asking themselves what kind of adolescent do I want to be.  If a kid does not have the opportunity to interact with other kids, if he is too isolated or he says his friends are all online, a kid’s growth is stunted.  Identity forms from social interaction and having deeds, which means you’ve done something.  This stuff doesn’t happen when a kid is ensconced in a dark room for hours at a time.

GL: I see a mix of these three as a psychotherapist.  Screen media overuse, specifically video game use, creates a defensive structure.  People do different things to assure their access to whatever they’re addicted to, so the three types that evolved for me are (1) the gangster; (2) the golem; (3) the charmer.

The gangster is when the kid develops a sense of false capability. There is typically chronic irritability.  There is surliness. A lot of frustration intolerance, blaming, lying, lack or remorse, and, use of obscenities.  These are the kids that project a lot of hostile intent toward parents.  Maybe this type, as a pure type, really takes it to the limit and uses physical threats to ensure access to their addiction.

The golem is collapse.  Tendency to whine and collapse in the face of stress, a lot of social anxiety and depression, intolerance for novelty or challenge, a lot of crying, threats of suicide and guilt.

The charmer just knows the parents are in their trance state and know the parents feel guilty.  The charmer uses that.  He gets by in school, is chronically sleep deprived, doesn’t have too many friends, nothing really makes him happy, but he knows what to say to parents to make them feel good that he is doing just fine.

MH: You have a section of your book that talks about from charmer to gangster and the impact of social media.  Can you explain that?

GL:  When you look at someone who has real presence with people.  When someone says someone is generally charming because they feel real, they are honest, and they have real presence; there are people like that.  But, if that is a personality style you are putting on in order to get access to what you want and you’re not really that person then eventually the real personality comes out like a Dr. Jekyll, Mr. Hyde kind of thing.  Often this can come out as guilt tripping other kids, making them feel bad, a variety of manipulative strategies.

MH: Do you have any final tips?

GL: To a lot of families, it looks impossible to have a screen free home or a screen managed home.  It’s certainly not impossible.  In fact, the people that started this industry, Steve Jobs, didn’t permit his to have iPads.  Same thing with Bill Gates and Ivan Williams said instead of iPad’s, we have books.  Say “no” out of love instead of “yes” out of fear.  You can say no.  You have to say no because your kids need you to be in charge.  If there is anything, I would like parents to carry forward, if you could think forward into your kids’ lives, they are going to thank you for saying no now.

Melanie Hempe, BSN, is the founder of ScreenStrong, an organization that empowers parents to delay toxic screens—video games & smartphones— for kids & teens while increasing healthy activities, life skills, and family connections. Through ScreenStrong, she provides easy education on brain development, the effects of screen use on kids, and solutions for parents who desire to free their kids from screen addictions. Melanie helps parents reclaim their kids by delaying the use of toxic screens and reconnecting families.
PrevPreviousParenting a Screen Dependent Child
NextSome Parents are Blind To Teen Pornography AddictionNext
Menu