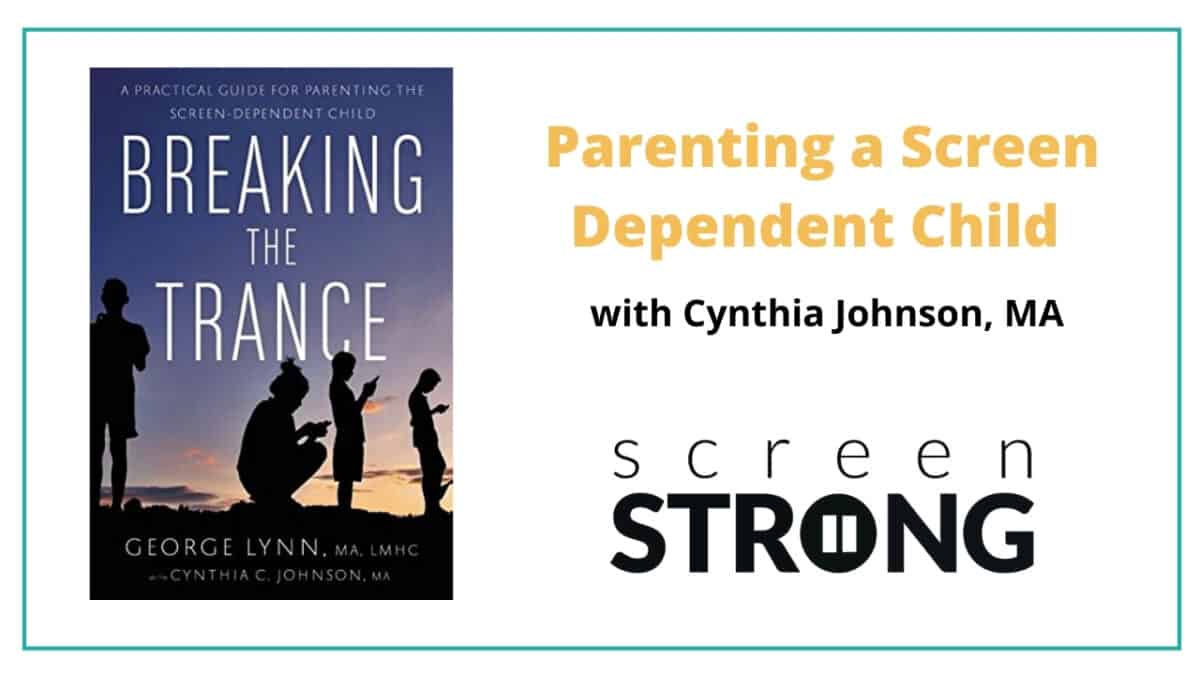 “Your family is stronger than screens.”

ScreenStrong started the 2021 Book of the Month series with Breaking the Trance written by George T. Lynn and Cynthia C. Johnson. Below is a summary of the interview between Melanie Hempe and Cynthia Johnson.

Melanie Hempe (MH):   Will you share about your background and why you are passionate about this topic.

Cynthia Johnson (CJ):    I founded the first-degree program in the nation for students with intellectual and learning disabilities and I did that for several years in Washington State.  Then I wanted to have my own tutoring business, so I went out into peoples’ homes.  I wanted to sit face-to-face with families with children.  When I did that I began to see what’s happening with screen time.  It’s really hurting kids big time.  I talked with George and we decided maybe we ought to write a book.

MH:    What would you summarize as the biggest danger for kids from all this screen addiction?

CJ:       As an educator, I would say the educational impact.  Readers are leaders and we see the lack of reading, the loss of identity, and diminished critical thinking skills.  Absenteeism is also skyrocketing in the United States because kids will come into a psychotherapist and say they are too upset and they can’t go to school whereas the kids from yesteryear – you didn’t go to school if you were running a fever or vomiting, but now… that kind of thing.

MH:    Why are kids so susceptible to low self-esteem and problems with their identity?

CJ:       Good question. We did extensive research in our book and talked to the psychologists that work with the big gaming companies.  They make compulsive loops that tweak dopamine, and they are very serious about this.  The designers know how to make things addictive.  They are building in features that make them addictive.

CJ:       It’s the best babysitter that’s ever been invented and it’s the most damaging.  The thing that I am seeing more and more is that parents have a very difficult time confronting children about most anything.  This is the first generation where the kids are in charge.

MH:    The next little piece in the introduction talks about the parental trance and this trance state.  You have several bullets about how parents get into this trance.  Will you talk about that?

CJ:       I think it’s important to understand this trance state because it’s this interlocking belief that gives an automatic response.  There are many times in my life when I “didn’t see it.” One time my sister and I had to sell our family property in southern Oregon.  She called me and said, “They are saying we have to cut down the trees there because they can’t see the rest of the land, there.”  I said, “What are you talking about Christine, that’s a huge view, its beautiful and so forth.  Let’s go down to Oregon and look at it.”  So, we went down and were looking at it and she said “See, look at these trees.”  I responded, “What are you talking about there are no trees here.” She then took my hand and placed it on a tree in front of my face and that broke the trance.  Because, as a little girl, I had remembered there were no trees there, so I had an automatic response.

CJ:       It’s very okay to be different because then you have your sense of self and know what things really intrigue you.  If the only thing you’re doing is twelve hours a day, you are going to do exactly what the gaming industry (a $66 billon dollar industry) wants.

Additionally, they are not being creative by being on screens.  When I talk to students about this, they say “No, no. I really am.”  I say “No, the people that designed those games, they were creative.  But you’re not being creative.  You are doing exactly what they want you to do.”  So then when I have students that stop, they say actually being outside or reading is really creative.  Video games aren’t creative at all.

MH:    Let’s dive into this whole definition of screen dependency.  The definition is compulsive engagement with screen media use despite the adverse consequences.  With that, you say “children who are compulsive users fly under the radar.  They are at greater risk because they can hide their dependence for years and not really take on any serious goals or challenges in their life.  They are secluded in their virtual worlds and avoid all the stress, trials, errors and other learning experiences that move a child through his or her development in childhood.”  So, talk about this flying under the radar, because I think that’s were most our kids are with screen dependency.

CJ:       People don’t realize how dependent kids can be.  It impacts some students more, psychologically, educationally, etc.  Special education students, be careful.  It can make a big, big difference.

An important part of getting out of that trance is finding out data.  It’s hard also for parents to understand that kids lie to them.  But the lies these days are pretty outrageous and they are indicative of addiction and dependence.

Example, one of my students, in order to get onto his phone, the kid had to have a parent fingerprint.  So, in the middle of the night, my student went into the bedroom, the mom was asleep, got his phone then was able to fingerprint his phone without her knowing.  The big deal for me is to face it and to actually document what’s happening.

MH:    I love it here when you say, “Getting a decent grade point average is not the most important reason for screen controls.  When looking carefully at the screen dependent children population we find many children are actually doing okay academically, although they might not be working to their potential.  So, why should parents be concerned about their children’s screen media if they are earning B’s and C’s.  After all, their ability to move through the grade show that they can focus on things.  So what is the big deal?”

CJ:      It’s really important that students know and find out who on earth they are.  Just like I tell my students with their writing – I want to know your voice, not my voice.  Part of growing up is figuring out who we are.  But the emotional, psychological, physical, all of those things, are having a huge, huge impact.  Just like when I used to go to the gym, they are closed here now, the head of the gym would say he could tell what kids used screens because their bodies were not as strong and they’re not growing as fast, etc., etc.  I’ve had angry gamers breaking their hands because they were so frustrated.  I had a kid who was an 18-year-old, and he wanted his iPhone back, so he did a face plant and broke his nose.  The dramatics that kids will do are pretty amazing.

MH:    Talk a little bit about the process of boredom and how a child becomes bored?

CJ:       When I hear a child say I’m bored, I know they are into video games or screen time.  People who are not don’t use the word bored.  Bored is analogous with screen time and being bored is okay.  It’s important to be bored so you can find out who on earth you are.

MH:    Your book says, “Deprived of access to recreational screen media, the child becomes bored and deals with the boredom by finding things to do.  The child’s brain needs this type of boredom because without it, it cannot exercise neurons that are part of the imagination process and this is how all of us develop skills and wisdom to grow up.”

CJ:       Just like we strengthen our bodies, it’s the same way.  The prefrontal cortex – that front of your brain – is very critical to helping be able to foresee what could happen.  And that cortex continues to grow until we are 22, 23, 24.  I also have to say there are kids who are going to college, graduating from college, and then coming home and not getting jobs and being screen dependent.

MH:  What do you tell parents who really come do you and say I just don’t know what to do?

CJ:  They are in charge.  Also, find out what’s happening, to be open to that and not be afraid.  What are your family’s goals, what are your belief systems in your family, who are you as a family – that is the most important thing.  Your family is stronger than screens.

Melanie Hempe, BSN, is the founder of ScreenStrong, an organization that empowers parents to delay toxic screens—video games & smartphones— for kids & teens while increasing healthy activities, life skills, and family connections. Through ScreenStrong, she provides easy education on brain development, the effects of screen use on kids, and solutions for parents who desire to free their kids from screen addictions. Melanie helps parents reclaim their kids by delaying the use of toxic screens and reconnecting families.
PrevPreviousSmartphones Provide Fuel for Helicopter Parents
NextThree Personalities of the Screen Dependent ChildNext
Menu
Menu
Menu
team@screenstrong.org
301 E. John St. Suite 163, Matthews, NC 28105 | Copyright © 2016-2022 | 501(c)3 EIN#: 47-5470710