The average child spends over fifty-two hours a week in front of electronic media. It is no longer a question why this has become the largest parenting challenge today. While recreational screens—video games, smartphones, social media—can be entertaining and fun, they are not designed with your child’s best interest in mind.

The average child spends over fifty-two hours a week in front of electronic media. It is no longer a question why this has become the largest parenting challenge today. While recreational screens—video games, smartphones, social media—can be entertaining and fun, they are not designed with your child’s best interest in mind.

How does the brain develop?

It takes 25 years for the brain to fully develop and mature.

The human brain starts forming just three weeks after conception. At birth, the baby’s brain contains 100 billion neurons. What changes throughout childhood are the connections between these neurons, called neuronal pathways. It was once believed that brain maturity followed physical development, but now we know that, while your teen may be physically taller than you, his or her brain is not fully connected yet. The emotion center of the brain develops before the judgment center which is not fully mature until the mid-twenties.

Your child’s activities will change and shape his brain.

Neuronal pathways are activity-dependent and reinforced through repeated use. Like dirt roads being paved, areas of the brain are strengthened based on frequent use. With enough repetition and practice, hard activities become easier. Exposure to many activities is the goal of childhood in order to form a well-rounded brain.

The goal of a healthy childhood is to build as many brain connections as possible and the goal of the teen years is to build efficiency. The “use it or lose it” principle applies here. The pathways (or activities) that are most used will be kept and strengthened, and those that are the least used will be shut down through a process called neuronal pruning. This process explains the incredible learning potential during this stage of development. It also explains the need to teach your child important executive function skills early like planning, organizing, and time management. Without well-developed executive function skills, young children and teens may have trouble with necessary capabilities such as focusing on a task, following directions, cooperating with others, and appropriately handling emotions. Parents are needed to provide structure during this stage.

What does too much screen time do to a child’s brain?

Screen overuse can harm and interrupt early brain development. Learning new skills is hard, but screens are easy. After all, who wants to learn how to tie a shoe when the iPad is calling your name? Screens are designed to be fun and distracting. Because there is only a short window of opportunity for important developmental activities to occur, it is important to pay attention to how we allow our kids to spend their time.

Screen time displaces time spent on important activities in a child’s developmental life. Some of these necessary activities include rough and tumble-free play, in-person social time with peers, reading, time in nature, problem-solving, attachment to family, and sleep.

Screen time triggers dopamine production in the brain which leads to strong habits, dependencies, and cravings for more screen time. This addictive element in all screen activities is impossible for kids to resist, making screen time the activity of choice.

The Adolescent Brain Cognitive Development Study is the first large study done by the National Institutes of Health designed to determine the effects of screen time on more than 11,000 children over a 10-year period. Preliminary findings from the study include: 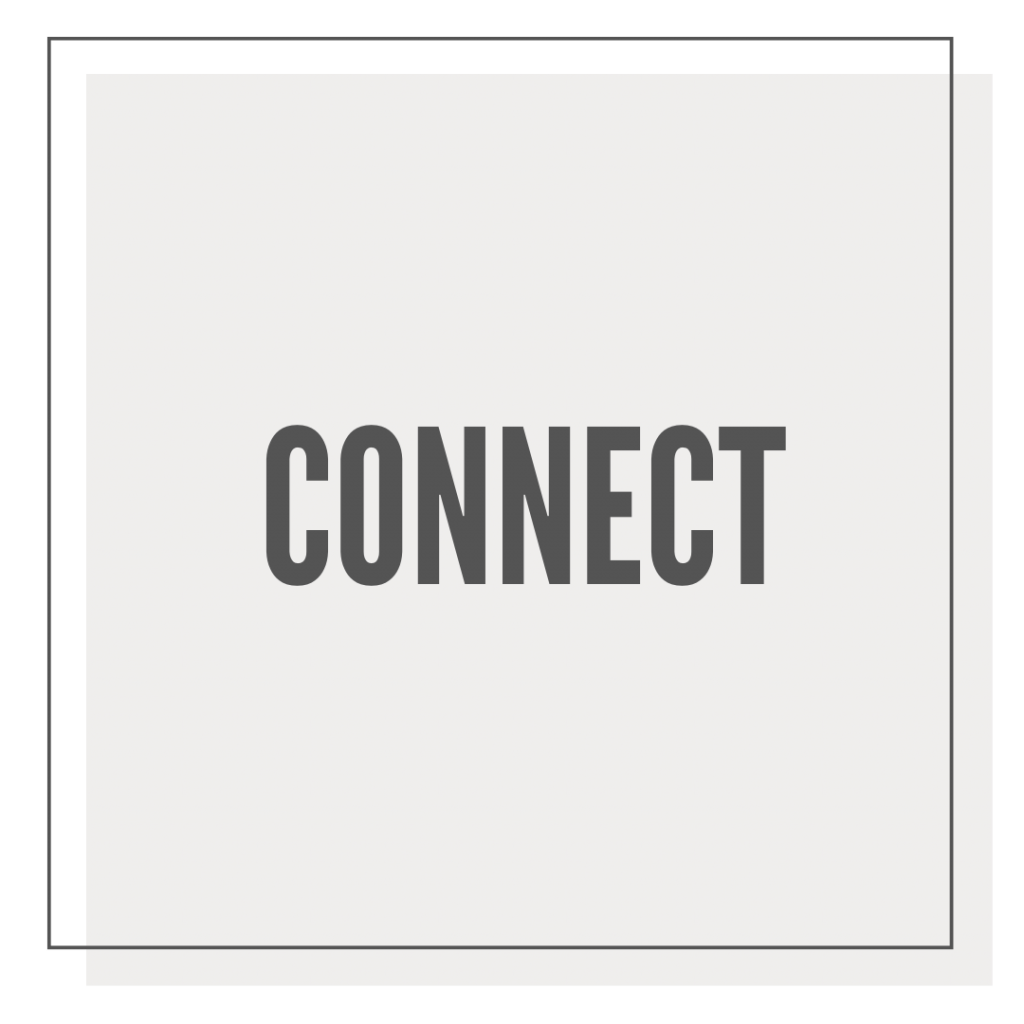 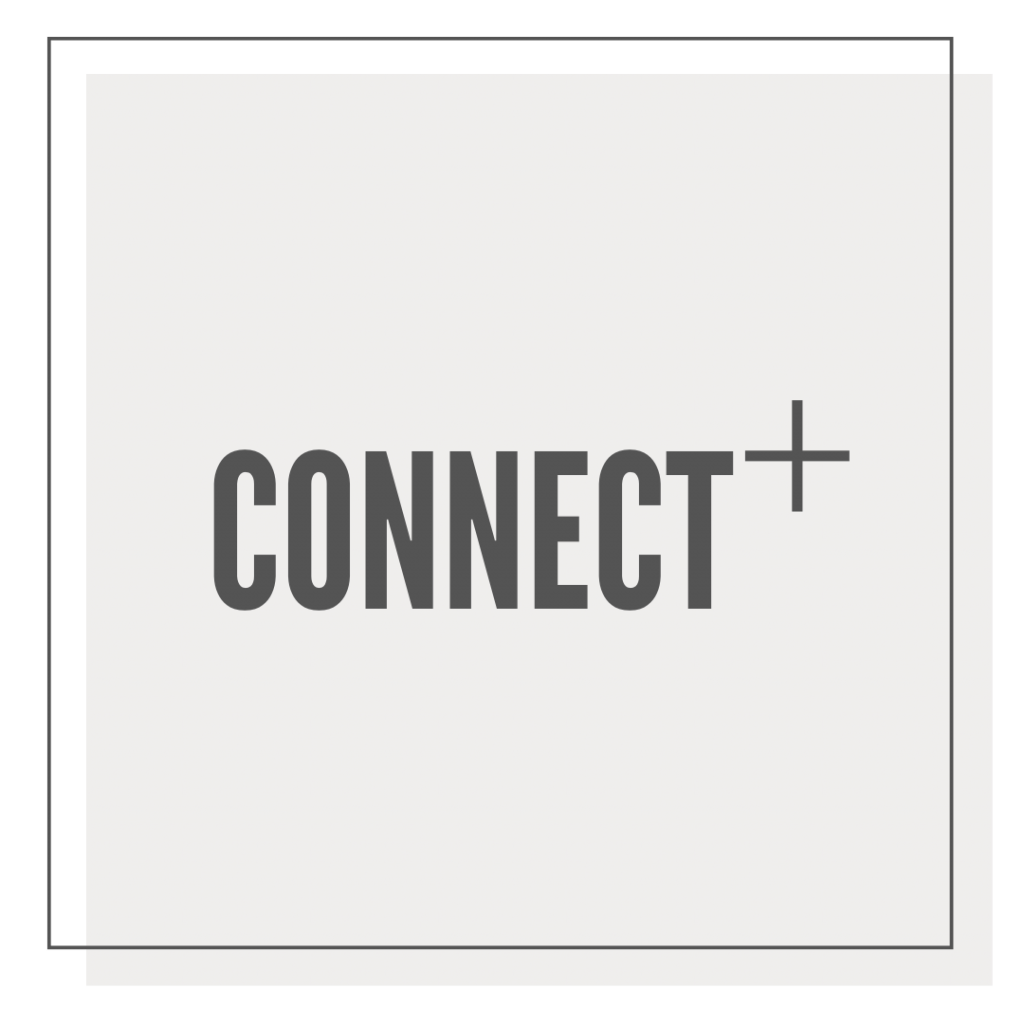 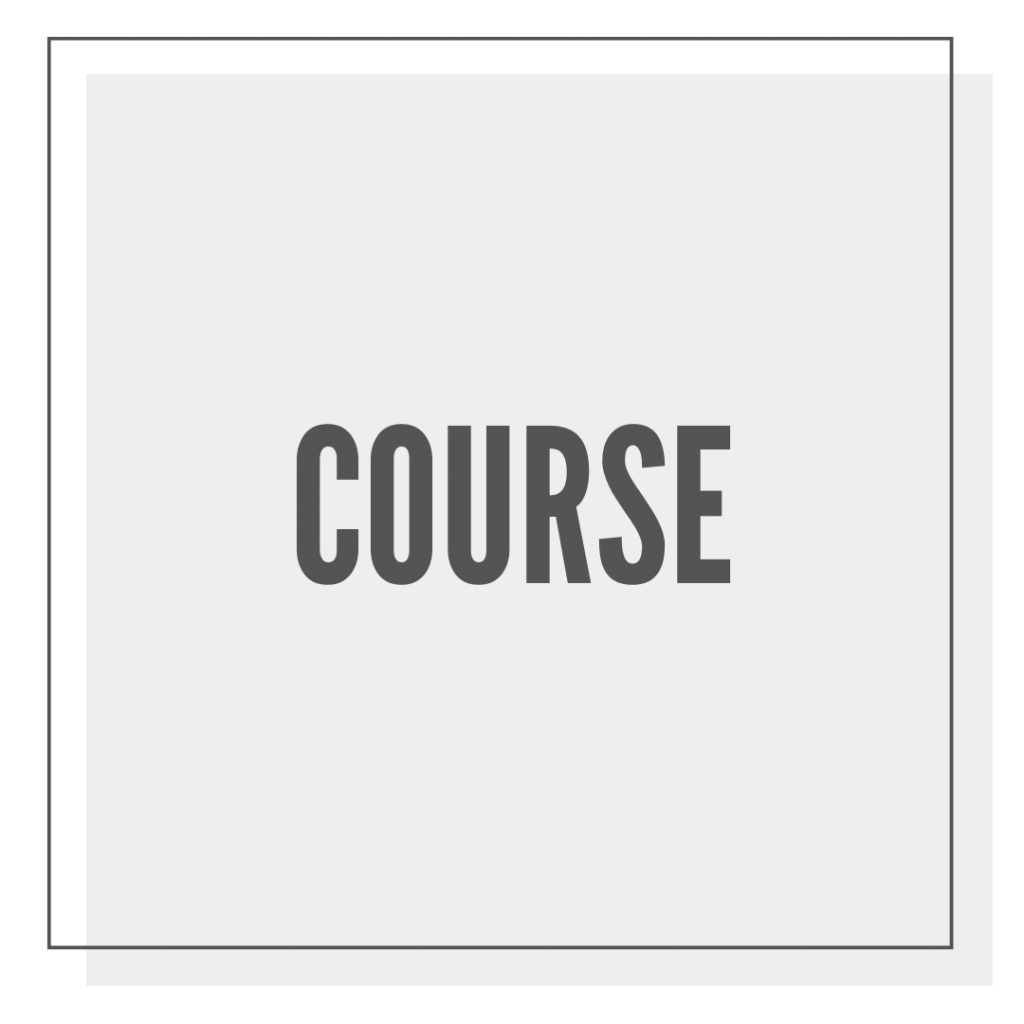 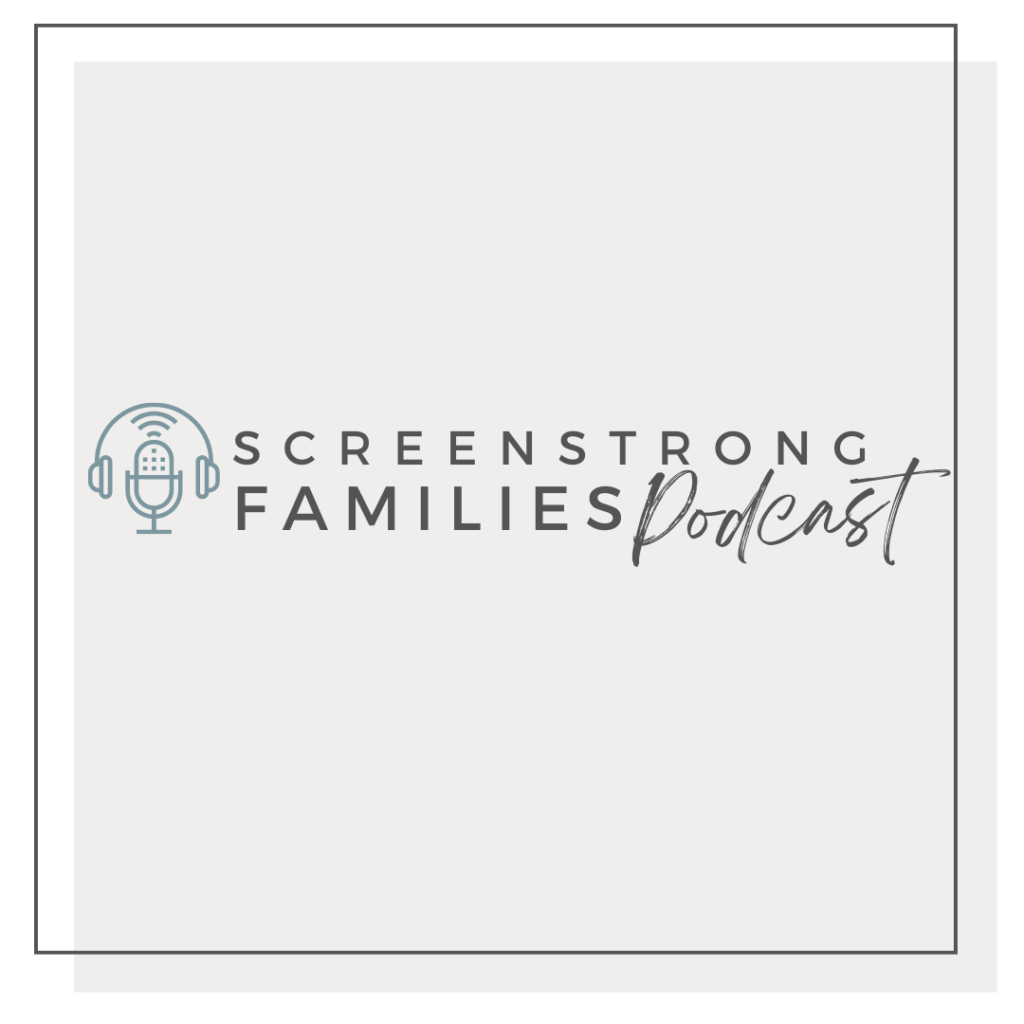 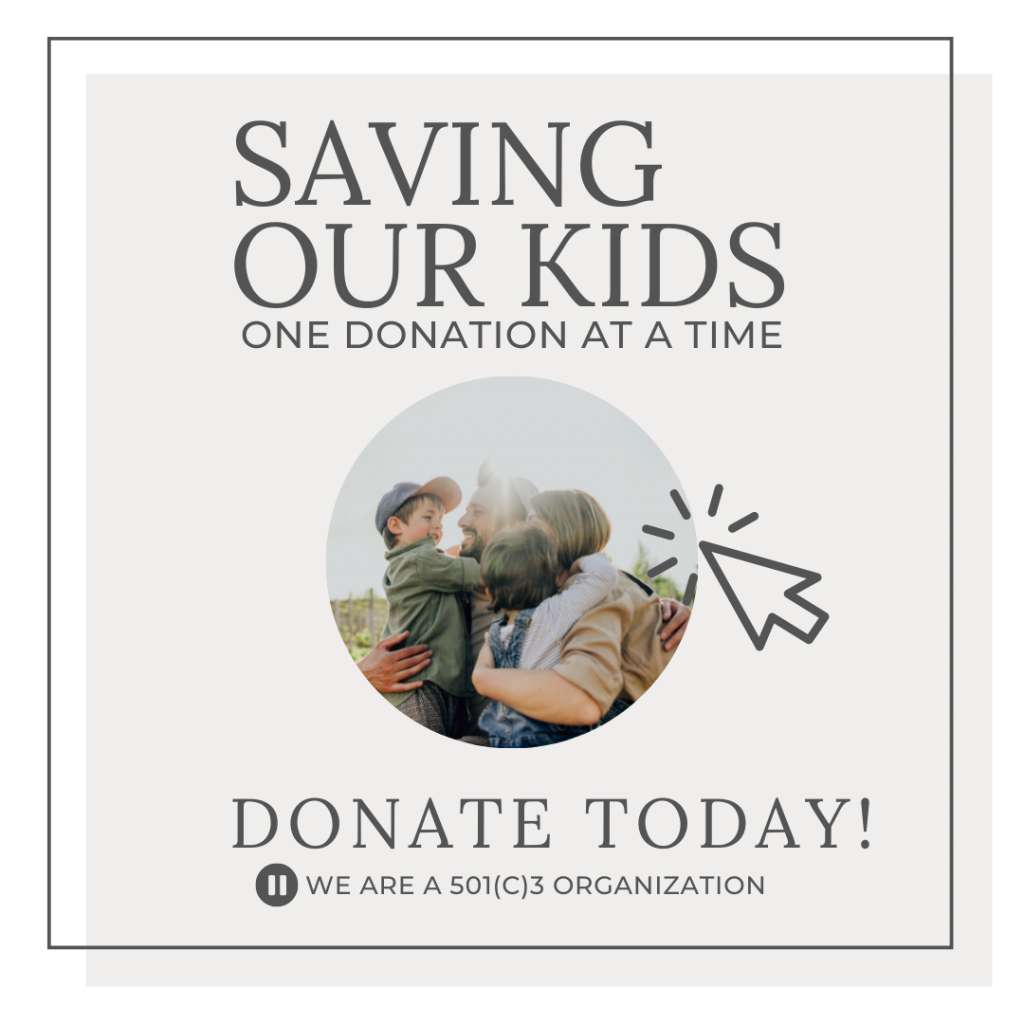 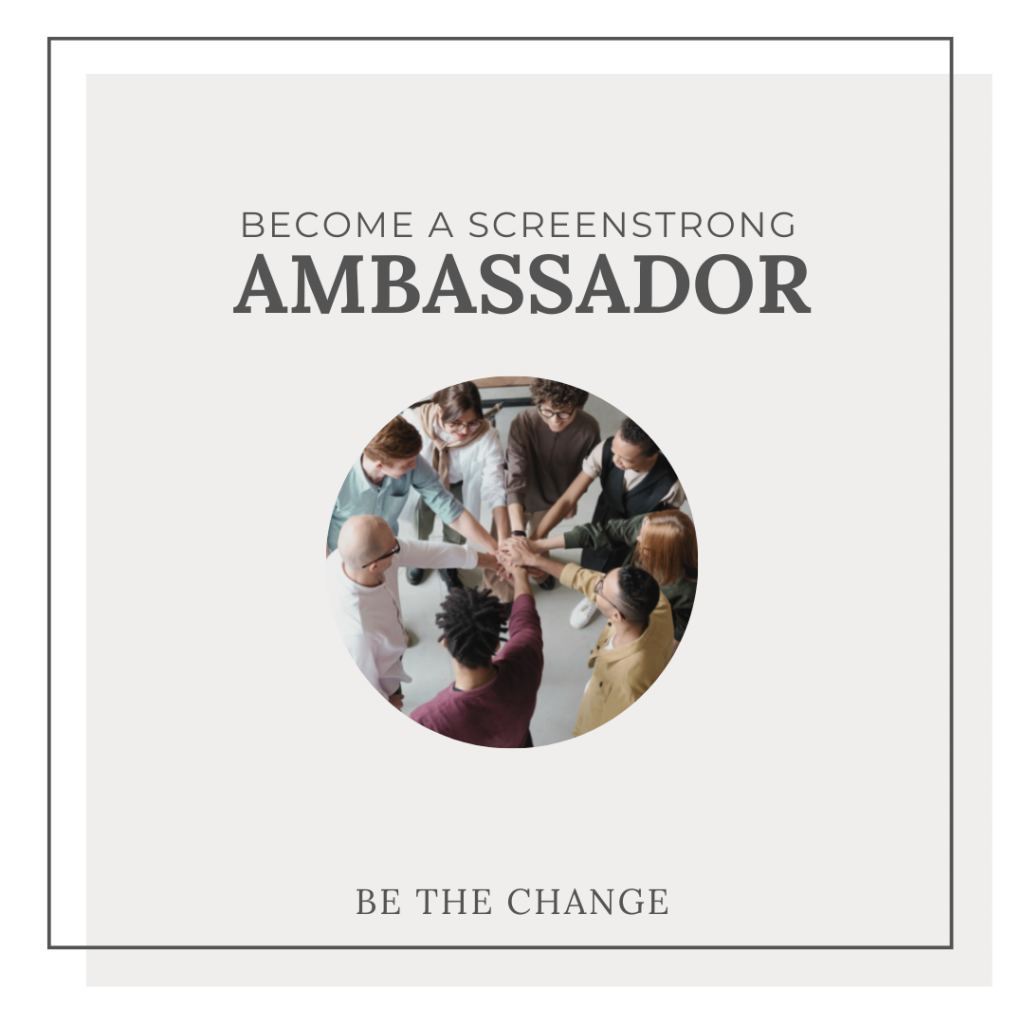 How long should a child be on a device?

It is important to remember that screentime is an entertainment activity, not a mandatory activity. In an ideal setting, children should have very little entertainment screen time, but cultural trends do not always line up with the best choices for healthy mental, physical, and emotional development.

The two important things to keep in mind are time and content. Limiting time is necessary, but the content is also important. Enjoying two hours of a family movie together is very different from spending two hours scrolling content on social media.

According to the American Academy of Child and Adolescent Psychiatry (AACAP), parents may not know what their children are viewing, or how much time they are spending with screens. 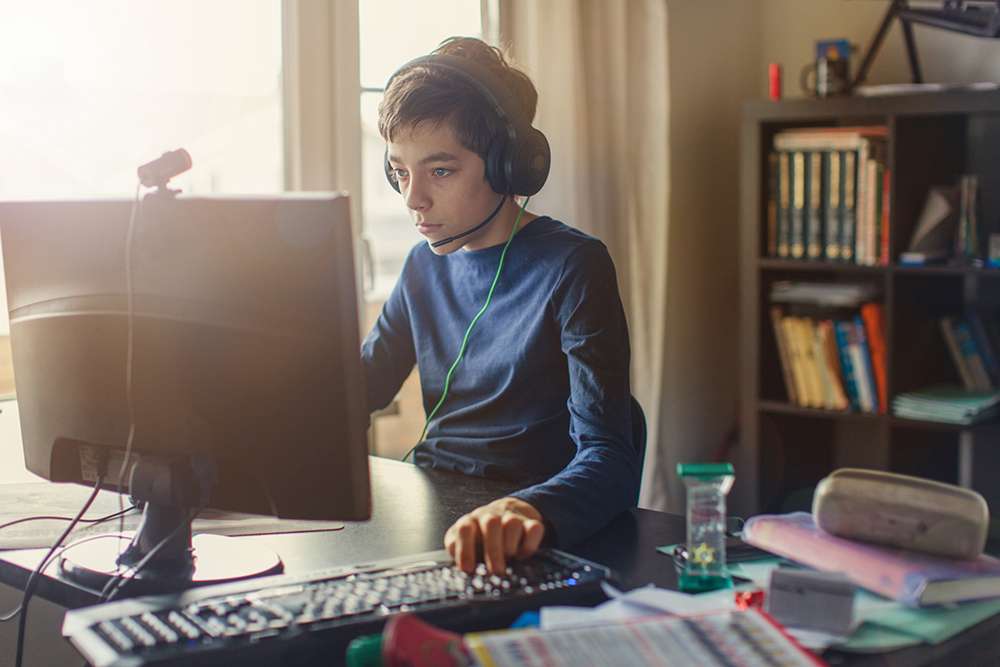 Children may be exposed to:

Too much screen time overall affects a child’s brain development and can contribute to the following:

The following are some of the screen time guidelines from the American Academy of Child and Adolescent Psychiatry (AACAP):

Until 18 months of age, limit screen use to video chatting along with an adult (for example, with a parent who is out of town).

Between 18 and 24 months, screen time should be limited to watching educational programming with a caregiver.

For children 2-5, limit non-educational screen time to about 1 hour per weekday and 3 hours on weekend days.

For ages 6 and older, encourage healthy habits and limit activities that include screens. Turn off all screens during family meals and outings. Learn about and use parental controls. Avoid using screens as pacifiers, babysitters, or to stop tantrums. Turn off screens and remove them from bedrooms 30-60 minutes before bedtime.

Is my child addicted to screens?

When you consider the new generation of screen media, it is good to keep an eye out for signs of addiction. Review this list often to understand warning signs of problematic screen use. 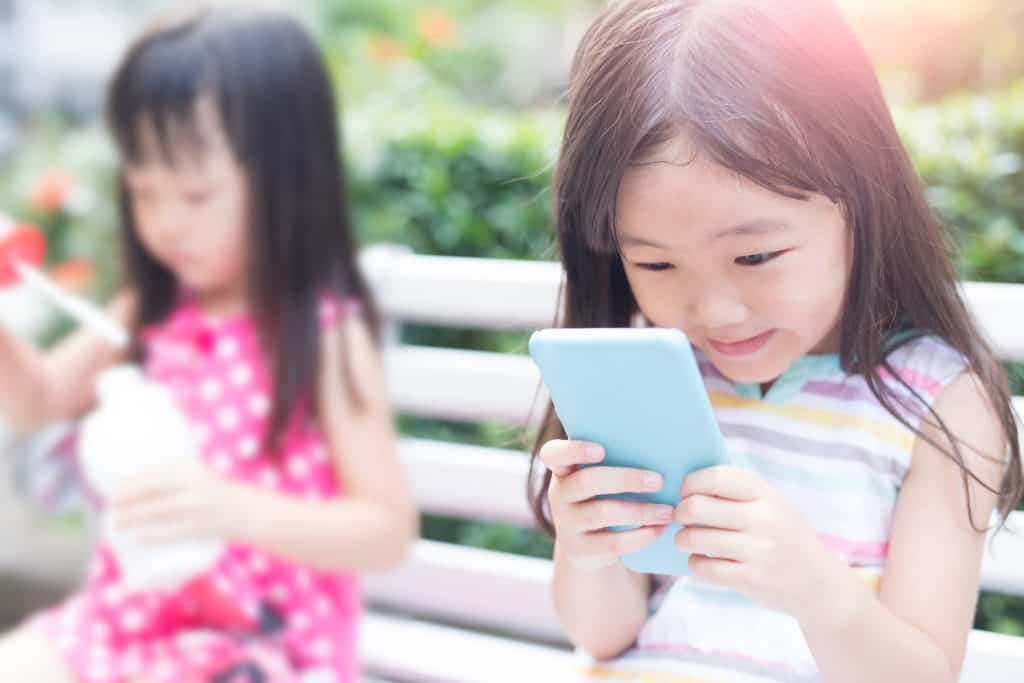 ScreenStrong successfully helps parents around the world prevent and reverse their children’s dependence on addictive screens. We help parents understand the science and identify solutions that address the problem at its core so they are empowered to delay smartphones and social media, and replace video games with healthy hobbies.

We recommend removing all toxic elements of screentime and only using beneficial ones. Many times toxic content falls in the categories of video games, social media, and pornography. 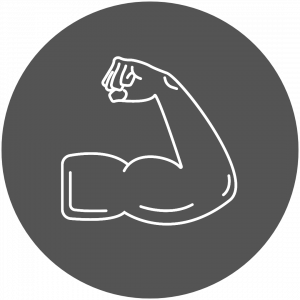 Build Healthy Families: Family connections and values are stronger when parents’ influence and leadership is greater than peers and screen culture. 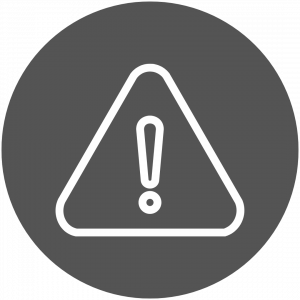 Eliminate Toxic Screens: Technology can be a useful tool, but toxic screen use is harmful (video games, social media, pornography), is not mandatory for any age child, and cannot be balanced. Moderation is a myth because a moderate amount of toxic screens is still harmful to children. 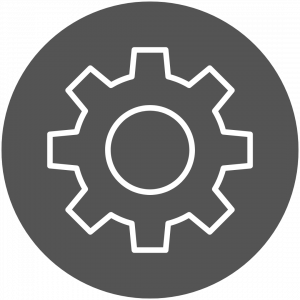 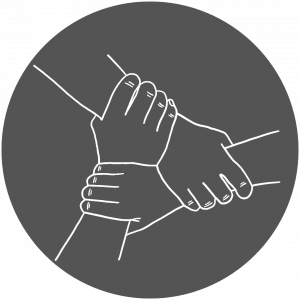 Prioritize Authentic Relationships: True communication and connections are developed in person—not on a screen. 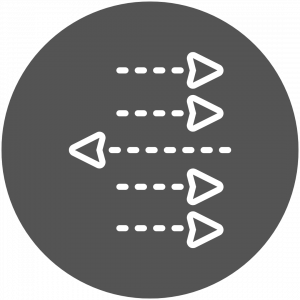 Dare to Be Different: Saying no to the use of addictive and toxic screens through adolescence is the best prevention for screen dependency.

When you know bette,r you do better. We have more research around digital addictions than we have ever had before. We know that all these digital addictions can be easily prevented. Research is conclusive: toxic screens are not necessary for childhood. There are wonderful screen-alternatives that come with very little risk. ScreenStrong can give you the answers, community, and support you need to raise happier, healthier kids. It’s time to stand up for kids, stand out from the crowd, and be ScreenStrong.

Disclaimer: This information is not a replacement for the therapy or treatment center necessary to help an at-risk or addicted child. If you feel like your child will potentially do bodily harm to you, himself or herself, you need to seek professional help.

Digital Stress Is Hurting Our Kids

Games and Social Media Trigger Excitement and Fear in a Way that can Alter a Child’s Brain Mindfulness may be growing in popularity, but so 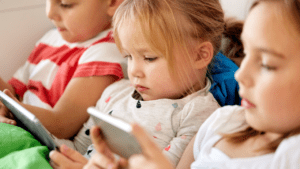 Parents across the globe are struggling with what some call the biggest parenting challenge of all time: how to control a child’s overuse of addictive 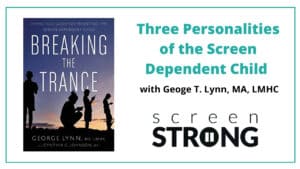 In this post, we continue our Book of the Month series with an interview between Melanie Hempe and Breaking the Trance co-author, George T. Lynn. 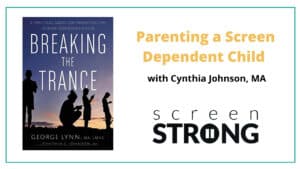 “Your family is stronger than screens.” —Cynthia Johnson ScreenStrong started the 2021 Book of the Month series with Breaking the Trance written by George T. 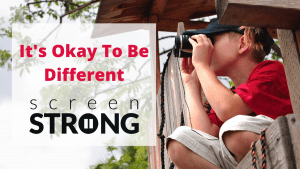 It’s Okay To Be Different

It’s Okay to be Different How we learned to be a ScreenStrong Family in a screen addicted world. by Julie Christian, ScreenStrong Ambassador   “I

The Screen Effect: A Call to Parents | ScreenStrong

A Call to Parents: The Screen Effect by Jennifer Ruisch, screenwriter & ScreenStrong Ambassador   The great experiment is underway. An entire generation of kids

Sleepovers: Should Parents Allow Them? Three things to consider before your kids pack that sleepover bag. By Melanie Hempe, BSN, Founder of ScreenStrong   You’re

Your Child is Not a Virtual Angel: Spoiler Alert | ScreenStrong

Spoiler Alert: Your Child is Not a Virtual Angel Tips on how parents can avoid blind spots when it comes to kids and screens. By

How to Reduce Screen Time in One Week

How to Reduce Screen Time in One Week Give your family a new perspective on life without mindless screen time. by Melanie Hempe, BSN, Founder

Out With the Negative and In With the Positive

Out With the Negative and In With the Positive By Melanie Hempe, BSN, Founder of ScreenStrong   Not too many years ago parents who came

Can Families Be Screen Strong in a Digital World?

Yesterday, our kids were dressing up in princess costumes and digging in the sandbox. Today, they are standing in front of their mirrors taking selfies 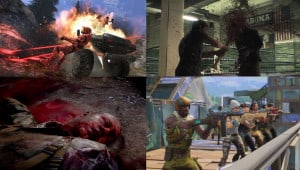 Photo: Halo, Dead Rising 3, Call of Duty: WWII, Fortnite We all know of [the] problems that video games can [cause]. And we haven’t done 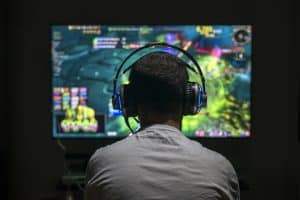 How Gaming Changes Your Child’s Brain

Has your child ever thrown a controller when playing a video game? Has he ever hit a sibling because of his gaming frustration? Do you 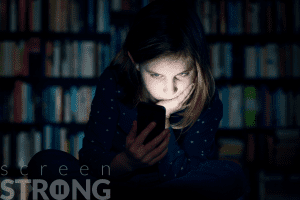 By Melanie Hempe, Founder of ScreenStrong – January 15, 2019 PHOTO CREDIT: iStock   Parents no longer need to rely solely on their intuition when it comes 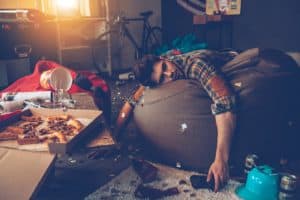 Does Limiting Screen Use Lead to Binging Later?

When it comes to kids and screens, we hear the myth of the forbidden fruit a lot. Parents ask, “Well, if I don’t let my

The Myth of the Over Scheduled Child

The Myth of the Over-Scheduled Child Is your under-scheduled child becoming obsessed with his screen? Chances are, you have read articles, talked with friends, and 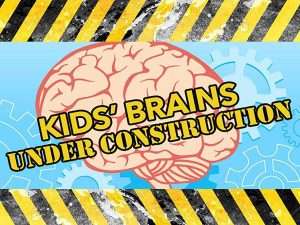 Caution! Teen Brain: Still Under Construction Even for the savviest parents, teen development can be deceiving. Our kids hit puberty and go through a growth

How to Destroy Your Child’s Love for Reading

How to Destroy Your Child’s Love for Reading Did you know that 80% of U.S. families did not buy a book last year and 33%