Will Your Gamer Survive in College?

Will Your Gamer Survive in College?

Stop the gaming addiction before you throw away college tuition.

Did you know that students with video game overuse habits are in one of the highest risk categories for dropping out of college their freshman year? So, while you are busy focusing on the packing list, be sure to leave one thing behind: the video games.

College is a fun time for young adults to learn new things and get a taste of freedom and independence. But while you’re wondering if your college freshman will ever call home, he’s busy thinking about what electronics he will pack. He is fantasizing about his upcoming “game haven” that will be funded by mom and dad. He is planning on using his graduation money to buy a really big monitor and extra ethernet cable in case the WiFi is lame. His fantasy includes hours of uninterrupted gameplay, late nights and all-nighters with other gamers. Their game play will take place in one of the many “gaming dens” that are all too common on college campuses today (moving all the beds into one room and gaming consoles in another). He is dreaming of endless Fortnite fun with no time limits, chores, family dinners, siblings, or other trivial family obstacles. Does he understand that his game habit puts him in one of the highest risk categories for dropping out his first year of college? No, he does not.

“One of the top reasons for college dropouts in the U.S. is online gaming addiction,” said Federal Communications Commissioner Deborah Taylor in 2008.(1) Studies show that 85% of college boys are game players, and one in eight develops addiction patterns. In a college of 20,000 students (assuming half are boys), 8,500 are game players. That means 1,063 students are at risk. Plus, research has shown a negative correlation between gaming addiction and expected college engagement, GPA, and drug and alcohol violations that occur during the first year in college(2).

Your bright student may not survive his freshman year.

If you have a gamer headed to college, take time to get informed. While your son may occasionally put his game aside for serious studying and healthy activities, the odds are he very well may not. Know that he will likely game more in college than he ever did at home. Know that he may sacrifice social time with real people, deny himself sleep, skip classes, and exchange classwork demands for his gaming.

The peer pressure to game will be great and the temptation to shift his motivation and competition to his game rather than his grades may be more than he can handle even if he was a straight A student in high school.

Tracy Markle, Founder of Collegiate Coaching Services & Digital Media Treatment & Education Center has directly observed a chilling rise in pathological computer gaming among her young adult clients. “When we conduct our initial assessments on new male clients, 75% have some level of computer gaming and/or internet abuse issue that contributes to the original presenting problems such as poor academic performance, difficulty concentrating and social anxieties.”

In addition to these reported problems, Markle points to other indicators of potential gaming addiction problems with college students, such as frequent absences from classes, roommate complaints, social isolation, and calls or emails from concerned parents.

What can you do now?

Video game addiction may be legal, common, accepted and culturally approved, but it can be life-altering for many. Take a serious look at your teen’s gaming habit and follow your gut feeling. He doesn’t magically become an adult when he turns 18, he is an apprentice adult and needs your guidance and counsel. It isn’t too late to get him on the right track so that he can experience the best college has to offer!

So before he heads to school, consider these steps:

Here are some signs that a college student gamer may be headed for trouble:

Help your son balance his gaming habit to make the most of his freshman year. Here are a few solutions to share with your gamer:

Help him learn to adult.

College tuition isn’t cheap and no parent wants to waste money on a year spent gaming instead of learning. But more important than the financial cost is the well-being of your child. Like a good coach, have the hard conversation that you know is in his best interest. I speak from personal experience as my son dropped out of college because of gaming. Don’t let his story be your son’s story, too.

For more information on gaming addiction, visit us at www.screenstrong.com. Take the Video Game Addiction Survey. Contact us for additional guidance and resources. 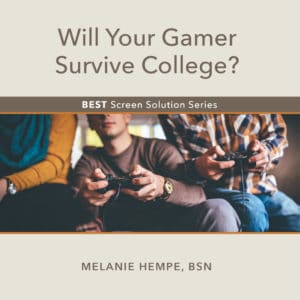 Melanie Hempe, BSN, is the founder of ScreenStrong, an organization that empowers parents to delay toxic screens—video games & smartphones— for kids & teens while increasing healthy activities, life skills, and family connections. Through ScreenStrong, she provides easy education on brain development, the effects of screen use on kids, and solutions for parents who desire to free their kids from screen addictions. Melanie helps parents reclaim their kids by delaying the use of toxic screens and reconnecting families.
PrevPreviousHas Fortnite gone too far in your house?
NextDoes Limiting Screen Use Lead to Binging Later?Next
Menu
Menu
Menu
team@screenstrong.org
301 E. John St. Suite 163, Matthews, NC 28105 | Copyright © 2016-2022 | 501(c)3 EIN#: 47-5470710